Over 230 partners from science and industry, including MPI CEC 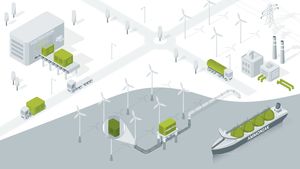 Federal Research Minister Anja Karliczek just announced that the BMBF is providing a total of 700 million euros from the German government's Future Package for three major research projects. The three lead projects focus on technology development for the production, transport and use of green hydrogen and are looking for solutions to overcome technological hurdles that still exist today when entering the hydrogen economy.

In total, more than 230 partners from science and industry, including major companies such as Siemens, Thyssen and RWE, are involved.

H2Giga
The largest of the three projects is to develop the technology for mass production of electrolyzers to make green hydrogen production competitive and minimize production errors. The goal is production plants that could be exported worldwide.
The H2Giga consortium of 112 partners is coordinated by Dechema Gesellschaft für Chemische Technik und Biotechnologie.

TransHyDE
The third project focuses on the development, research and evaluation of transport options for hydrogen. In addition to materials research, this includes the development of standards and safety regulations to enable hydrogen transport over short and medium as well as long distances.
The 89 partners of the TransHyDE consortium are coordinated by RWE Renewables GmbH, the Fraunhofer Institute for Energy Infrastructure and the Max Planck Institute for Chemical Energy Conversion.

Further information on MPI CEC's participation in the TransHyDE project will follow shortly.

The three large-scale projects, which are expected to start in spring 2021, are intended to help establish hydrogen as an energy carrier, to highlight Germany as a technology leader and, above all, to help achieve the climate targets. All those involved see the projects as having considerable potential for creating value for the German economy - and the opportunity to also make those areas climate-friendly that are currently the greatest burden on the climate: Industry, transport and heat supply.

For further information on the projetcs see: