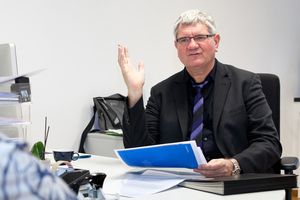 Prof. Robert Schlögl, Vice President of the Leopoldina and former Managing Director of the MPI CEC

Today, Tuesday, 28.06.22, the G7 summit meets at Schloss Elmau. In an interview with BR24, Robert Schlögl explains that it would not be enough if the outcome of this summit was only a commitment to climate protection. Rather, he calls for a reduction of carbon dioxide as the most urgent measure for climate protection. To achieve this, major investments would have to be made worldwide, especially in infrastructure, in order to develop alternative energy sources and establish transport routes for them. According to Schlögl, the G7 countries would have an essential role to play here.

The full article can be found at the following link: https://www.br.de/nachrichten/deutschland-welt/leopoldina-vize-schloegl-atomkraft-klimapolitisch-unsinnig,T9hLEEJ