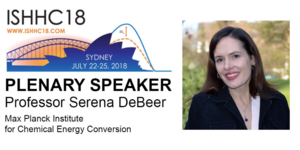 On July 22nd, Prof. Serena DeBeer, the director of the Department of Inorganic Spectroscopy at the MPI CEC, is going to give the opening plenary lecture at the International Symposium on Relations between Homogenous and Heterogeneous Catalysis in Sydney, Australia.
This international Symposium with a long and distinguished history, dating 1974, aims to address the relationships between homogenous and heterogeneous catalysis, and last years also biocatalysis. The organizing committee highlight that the ISHHC symposium is a creative environment, where scientists from all three communities can be inspired and learn from each other’s successes and breakthroughs.

Serena DeBeer will give a lecture entitled: “From biological to heterogeneous catalysis: Spectroscopic studies of dinitrogen reduction”. In her talk, she is going to present her group’s research towards the development of advanced spectroscopic tools to examine biological and heterogeneous systems responsible for the conversion of dinitrogen to ammonia. This presentation will also highlight strives of bringing together the fields of biochemistry and heterogeneous catalysis, by utilizing inorganic, physical and theoretical chemistry.

In addition to Prof. DeBeer, Dr. Deven Estes is actively going to participate in the ISHHS18 symposium. Dr. Estes is a postdoctoral researcher in the Multifunctional Catalytic Systems group led by Dr. Alexis Bordet (Department of Molecular Catalysis). He is going to talk about his recent progress in developing supported catalyst system for the synthesis of dimethoxymethane from CO2 and molecular hydrogen.