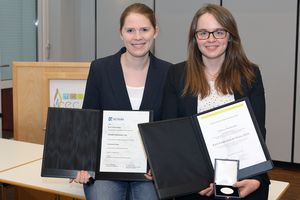 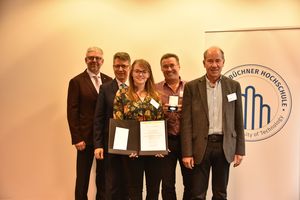 Tabea Mußfeldt at the award ceremony of the Karl Goldschmidt Prize 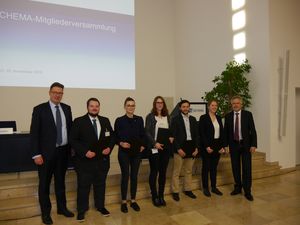 In November, two young scientists from the Department of Molecular Kataylse headed by Prof. Walter Leitner received awards for their final theses.

During their studies, the two young female scientists achieved outstanding results and convinced the respective jury with their research results.

The Karl Goldschmidt Prize is awarded by the Goldschmidt Foundation in memory of Dr. Karl Goldschmidt's work as a pioneer of in-service training and further education, which began over 100 years ago and is intended to promote young people who have qualified for and successfully completed their studies at a German university via the "Third Way of Education". The foundation focuses on outstanding final theses in the field of engineering sciences.

This year, the jury selected Tabea Mußfeldt as the prizewinner and awarded her Bachelor's thesis entitled "Evaluation of the Mixing Behaviour of Multiphase Systems under Consideration of Different Reactor Geometries". Her work is a building block in the production of synthetic fuels and an innovative contribution to a highly relevant field of research.
The aim of the her thesis was to evaluate the mixing behaviour of an argon/1-octen/water system based on the hydroformylation of 1-octene. Process variables such as the reactor geometry and the dispersion phase fraction, which influence the macrodynamic behaviour of the dispersion, were taken into account. With the help of an image-based evaluation of the dispersions, Mußfeldt gained insight into the drop and bubble size defining phenomena.

Tabea Mußfeldt successfully completed her training as a chemical laboratory assistant at the MPI CEC 2013 and was subsequently taken over by the institute. At the end of 2017 she took over the 'General Lab Management & Reaction Engineering' in the Department of 'Molecular Catalysis' at the MPI CEC. In addition, Mußfeldt completed the certificate course "Production Engineer VDI" part-time and in 2016 began the bachelor's degree course "Engineering - Chemical Process Engineering", which she successfully completed at the beginning of 2019.

The Karl Goldschmidt Prize is endowed with 5,000 €.

In her master thesis entitled "Crystallization as a recycling concept in the methoxycarbonylation of oleic acid methyl esters", Katrin Köhnke was working on recycling catalysts.
For this work she has now received the DECHEMA Student Award.

Köhnke explains the core of her work as follows: "The recycling of catalysts is always a special challenge in homogeneous catalysis because all components are dissolved and separation is not easy. However, it is very important from both an economic and ecological point of view to use the full capacity of the catalysts, which are often produced at great expense.
Product crystallization is a particularly elegant recycling option because it works under particularly mild conditions. This saves energy costs and is very gentle on the catalyst system. In addition, the product is obtained as a solid and in very high purity, so that it can be directly reused. A good example is methyl oleate. It is obtained from renewable vegetable oils and is particularly suitable for our method due to its solubility properties in methanol. Of course, it can also be applied to other compounds."

Katrin Köhnke wrote her master thesis in 2018 at the Department of Technical Chemistry in Dortmund under the supervision of Norman Herrmann, Dr. Thomas Seidensticker and Prof. Dieter Vogt. Köhnke would like to thank all three of them for their excellent support, but above all Prof. Vogt, who suggested her for the award and was very supportive.
The award ceremony itself took place during the DECHEMA general meeting in Frankfurt.