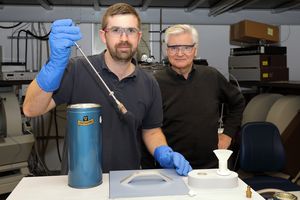 [FeFe] hydrogenases are highly active and efficient hydrogen conversion and production enzymes used by many bacteria and algae. Numerous researchers are trying to use them directly in technological applications, while others are deriving inspiration from the hydrogenases for the development of industrial catalysts. For the latter, a thorough understanding of their catalytic mechanism is critical. Despite years of research by many groups, the mechanism is still intensely debated.

Particularly controversial is the structure and catalytic relevance of a pair of intermediates known as “HredH+” and “HsredH+”. One group of researchers contends that these states are inactive and contain a stable bridging hydride species, replacing the usual bridging carbonyl group observed in all other catalytic states. In their study published in JACSrecently, the team of James Birrell, Wolfgang Lubitz and Serena DeBeer from MPI CEC, together with collaboration partners from TU Berlin, UC Davis, University of Illinois and SPring-8, Japan, provide clear spectroscopic evidence against the bridging hydride and show that the bridging carbonyl group is retained in all catalytic states. These results represent a crucial step toward a coherent mechanistic model for these fascinating enzymes, which will help to inspire chemists in the future.