Award ceremony and symposium in Mülheim with top-class speakers 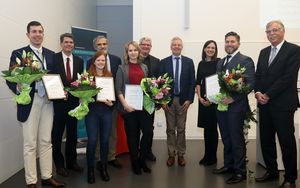 This science prize, which is endowed with €10,000 in total, has been awarded since 2006 to young scientists for outstanding achievements in the field of chemistry.

The Ernst Haage Foundation and the award were named after Ernst Haage, an entrepreneur from Mülheim who died in 1968 and whose scientific and technical instruments, devices and tools had been closely linked to the research of the Mülheim research institutes since 1932.
His daughter, Ursula Bonnen, established the foundation in 2006 together with the MPI for Chemical Energy Conversion to commemorate her father, who has always maintained close contact with the research institutions in Mülheim, and who was particularly interested in promoting young talents.

Ursula Bonnen unfortunately passed away in 2019. "We are extremely grateful for her generosity and are delighted that she made it possible for us to award the prize," explains Prof. Walter Leitner, Director at the MPI for Chemical Energy Conversion. Ms. Bonnen has always been extremely modest and has left the spotlight on the award winners.

This year's award ceremony was once again embedded in a top-class symposium to which internationally renowned speakers were invited. A total of eleven scientists from the USA, France, Germany, Spain, the Netherlands, Switzerland and Great Britain presented their latest research results and passed on their knowledge to the researchers of the Max Planck Institutes in Mülheim. "The symposium is a great opportunity for us and our PhD students and postdocs to make contact with such first-class scientists from all over the world. We are honored that they have all come to Mülheim," says Prof. Frank Neese, Director at the MPI für Kohlenforschung and spokesman for the Mülheim MPIs in the Ernst Haage Foundation.

More detailed information on the award winners can be found in our press release (german only).