Prof. Schlögl awarded with the Alwin Mittasch Prize during the annual meeting of the German Catalysis Society 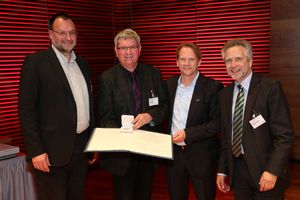 The MPI CEC Director received the award for his outstanding achievements in the field of heterogeneous reactions and their processing for industrial applications. He managed to link model-catalysis and the complex technical catalysis. Further details you will find in the press release (in German only).