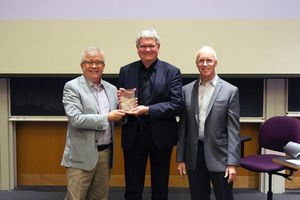 [Translate to EN:] Robert Schlögl am Institute for Sustainability and Energy an der Northwestern University

The Center for Catalysis and Surface Science (CCSS) has appointed CEC Director Robert Schlögl its 2019 Ipatieff Lecturer. He will give the talk entitled "What Makes Heterogeneous Catalysis Work: Dynamics of Catalytic Material" on September 26th.

The Ipatieff Lecture was established in 1988 and aims to enhance the experience of doctoral and postdoctoral students of the university. The lecture series is named after Vladimir N. Ipatieff, professor at Northwestern University, who achieved many breakthroughs in catalysis research with his laboratory founded in 1931.