Hybrid event was a great success 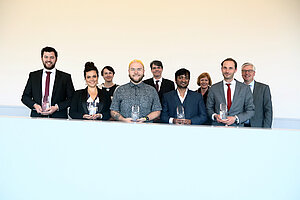 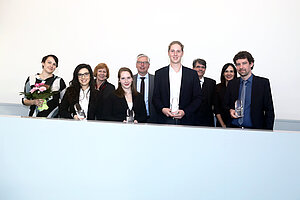 Last week, the MPI for Chemical Energy Conversion and the MPI für Kohlenforschung honored young scientists with the Ernst Haage Prize for Chemistry. After the 2020 event had to be cancelled, this year's award ceremony was held as a hybrid event at which the award winners from 2020 were also honored.

The award ceremony took place on November 5, 2021 at a ceremony at the Max-Planck-Institut für Kohlenforschung in Mülheim an der Ruhr. The national award winners as well as the winners of the Ernst Haage Awards for PhD students each gave a lecture on their work and thus provided the general public with an insight into their research work. The award ceremony could be followed online via a live stream.

The science prize is awarded in three categories and has been honoring young scientists for outstanding achievements in the field of chemistry since 2006.

A nice report on the event can be found on the website of the MPI für Kohlenforschung.

Detailed information on the award winners can be found in our press release (.pdf) (German only) and on our website.