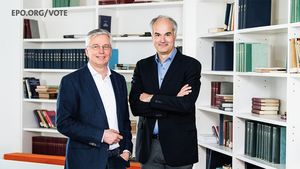 Prof. Walter Leitner, director of the 'Molecular Catalysis' department, and Christoph Gürtler of Covestro AG have been named among the three finalists for their contributions to sustainable chemical production.

Together with their team, the two chemists have succeeded in producing plastics from the greenhouse gas CO2. For this, the European Patent Office (EPO) has nominated them in the Industry category of the European Inventor Award 2021. The winners will be chosen on June 17.

The CO2 technology makes it possible to use the harmful climate gas as a valuable raw material for sustainable plastics. The process uses chemical catalysts to drive reactions between CO2 and a conventional raw material. This creates so-called polymers in a more sustainable and economically viable way. The CO2 is tightly integrated in the process.

"The successful partnership between basic research and industrial know-how has laid the foundation for this development," says a delighted Prof. Leitner. "It is a rare stroke of luck for me as well as for the young scientists involved to be part of such a process."

Every year, the public can vote for their favourite inventor in the Popular Prize.