Interview with Prof. Wolfgang Lubitz for the GDNÄ 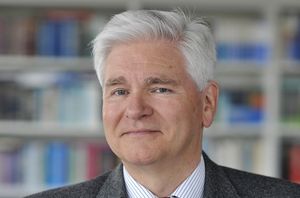 Lubitz has been a member of the GDNÄ for many years and has also been a member of the society's board of directors since 2017. With his support for the society, he wants to emphasize how important the "dialogue with the public, but also the interdisciplinary dialogue between the scientific disciplines"1 is. He sees a lot of potential for improvement there.

"What I also want is more understanding of the methodology of science. Their results develop in carefully planned and executed experiments, which are often error-prone and have to be validated several times until a reliable result is available. None of this works at the push of a button, it takes time. I am happy to contribute to creating awareness and building trust in science – together with the GDNÄ.”1

To spread this message, you need scientists who communicate well and who teach and talk about their work. Without science and research and the technical implementation of their results, modern life would look very different. Telecommunications, antibiotics, vaccines, sustainable energy use, all of these would not be part of our world if it were not for scientists. For Lubitz, one thing is certain: "Scientists change the world."1

In the interview, Lubitz also talks about his research at MPI CEC on efficient energy storage in chemical compounds: "a perfect catalyst that meets all the requirements in terms of efficiency, stability, scalability, eco-friendliness, material availability and price and has proven itself in practice"1 has unfortunately not yet been found, says the former director of the Department of Biophysical Chemistry. "So there is still a lot of room for good ideas and developments in this hot field of research.”1

Lubitz also has good ideas for the GNDÄ's 200th anniversary celebration, which is scheduled to take place in Leipzig in 2022 and in whose planning and organization he is involved.

1All quotes are taken from the interview on the GDNÄ website. The full interview can be read there.

The Society of German Natural Scientists and Physicians e. V. (GDNÄ) was founded in 1822 and is thus the oldest German scientific association. It unites scientists from different disciplines under one roof to discuss scientific, medical and technical developments and topics.

Max Planck was chairman of the GDNÄ in 1921/22 and Alexander von Humboldt, Fritz Haber and Albert Einstein were also closely associated with the GDNÄ and had a strong influence on the society.

An important concern of the GDNÄ are school programs for the promotion of young scientists, but also the dialog with the public and the close cooperation with partners from science and research.