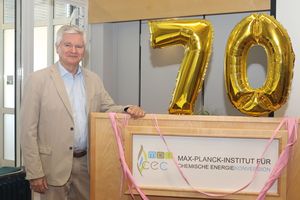 Lubitz received his doctorate from the University of Berlin in 1974 and thus began his scientific career. After a stay abroad in San Diego and professorships in Stuttgart and Berlin, Lubitz was appointed director of the former MPI for Radiation Chemistry in 2000, which was renamed the MPI for Bioinorganic Chemistry in 2003. There he headed the Department of Biophysical Chemistry until 2017 and was Managing Director from 2004-2011. His research focused on the detailed understanding of the natural processes in photosynthesis by using, for example, EPR spectroscopy.

Prof. Lubitz has shaped the international scientific world with his research and can refer to a multitude of awards and memberships. For example, he was awarded the "Gold Medal of the International EPR Society" and became a "Fellow oft the Royal Society of Chemistry" in Great Britain. Since 2015, he has been Vice President of the Board of Trustees of the annual Nobel Laureate Meeting in Lindau.