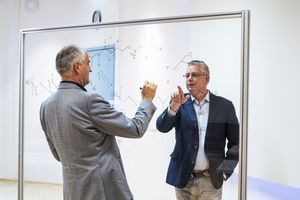 They have opened up a new raw material for the chemical industry. Thanks to the work of Walter Leitner, Christoph Gürtler and Berit Stange, the greenhouse gas CO2 can now be used to partially replace the petroleum that is used in foam and adhesives. The catalytic process and the first products produced with the new technique were selected by the jury for the final round of the German Federal President's Award for Innovation in Science and Technology (Deutscher Zukunftspreis). Walter Leitner is Director at the Max Planck Institute for Chemical Energy Conversion and Professor at RWTH Aachen, Christoph Gürtler is Head of New Processes and Products at Covestro, and Berit Stange is Head of the Polyurethane Environmental Services Division. The finalists present their innovation today at the German Museum in Munich. The winner will be announced on November 27th by President Frank-Walter Steinmeier.

A video of the presentation of the project to the jury has now been published on YouTube.