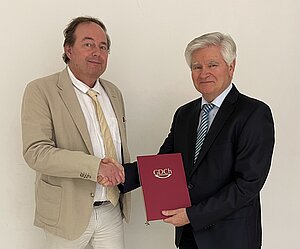 The Chairman of the Division Magnetic Resonance of the GDCh Prof. Dr. Jörg Matysik awards Prof. Dr. Wolfgang Lubitz with the honorary membership.

Prof. Dr. Wolfgang Lubitz, former director of the Max Planck Institute for Chemical Energy Conversion, has been awarded honorary membership of the "Magnetic Resonance" division of the Gesellschaft Deutscher Chemiker (GDCh) in recognition of his decades of support for EPR spectroscopy. The fruits of his labor have spurred research in the division, made many scientific discoveries possible, and contributed decisively to the outstanding position of magnetic resonance in Germany in general and EPR spectroscopy in particular. He receives the award as the first EPR spectroscopist.