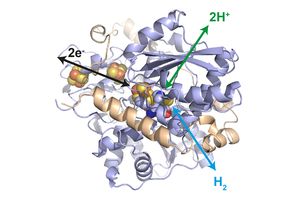 Structure of the hydrogenase from Desulfovibrio desulfuricans. In its active center, an iron-sulfur cluster catalyzes the oxidation of hydrogen to protons as well as the reduction of of protons to hydrogen. Further iron-sulfur clusters enable the electrons to be transferred to the surrounding polymer.

Hydrogenases, Nature’s catalyst for producing or consuming hydrogen, are as active and reversible as platinum, the best catalyst currently used in fuel cells but are sensitive to extreme conditions, such as exposure to oxygen. Protecting the hydrogenase in redox-active polymers allows hydrogenase to operate for weeks under conditions where it would otherwise deactivate within minutes. However, in the past this protection came with a trade-off: loss of reversibility. This meant a large amount of energy was lost as heat when consuming hydrogen and it was not possible to run them in reverse and produce hydrogen.

Making the polymer to go both ways

The breakthrough, published in Nature Catalysis, is that tuning the polymer’s affinity for electrons (the so-called redox potential) enables fast hydrogen conversion catalysis s as well as hydrogen production with very low energy loss. This proved challenging as the molecular groups that exchange electrons with the hydrogenase shift their redox potential to more positive values when they are in the polymer. To compensate for this, the redox potential of the groups needed to be tuned to more negative values before incorporation in the polymer. This allowed highly efficient hydrogen converting fuel cells and hydrogen producing water electrolyzers to be built using hydrogenase.

A blueprint for unconventional catalysts in fuel cells and electrolyzers

With these advances, the barrier to maintaining reversibility while protecting sensitive catalysts in applications has now been lifted. Further steps are still needed for making such systems competitive with platinum based catalysts. Nevertheless, the lessons learned for achieving reversibility will be immediately transferable to other highly active and scalable, but fragile catalysts in energy conversion and electrosynthesis. Immediate targets are enzymes for producing liquid fuels or value-added chemicals from carbon dioxide using renewable energy.