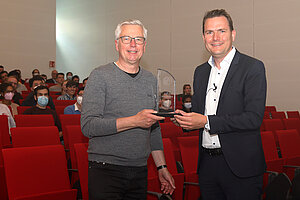 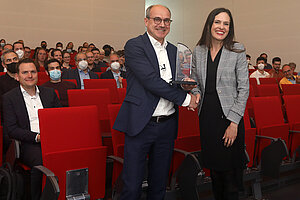 As part of the anniversary celebration "10 years MPI CEC", the Max Planck Institute for Chemical Energy Conversion in Mülheim an der Ruhr presented the Frontiers in Chemical Energy Science Awards 2021 and 2022 last week. The MPI CEC has been presenting the Frontiers Award for many years to internationally renowned scientists for special achievements in the field of chemical energy conversion.

The Frontiers Award 2021 went to Prof. André Bardow from ETH Zurich. André Bardow has been a full professor of energy and process systems engineering at ETH Zurich since 2020. He conducts research on the optimization of energy systems and in particular on sustainable CO2 utilization. Bardow began his Award Lecture, entitled The next CEC frontier: Circular Energy and Chemicals, by congratulating the host institute on the occasion of its tenth birthday.

The Frontiers Award 2022 was awarded to Prof. Bert M. Weckhuysen from Utrecht University. Bert M. Weckhuysen is Professor of Inorganic Chemistry and Catalysis at Utrecht University, where he and his group conduct research on the development of structure-activity relationships in the field of heterogeneous catalysis and materials science. Weckhuysen also congratulated MPI CEC and held an Award Lecture entitled Advancements in Understanding Catalytic Processes to Foster the Transition Towards a More Sustainable Society.

During the award ceremony, the award winners gave a keynote speech and were also available for scientific discussions, especially with young scientists of the institute. As the Frontiers Awards 2021 and 2022 were presented this year as part of the anniversary celebrations of the MPI CEC, both awardees also participated in an internal workshop on the morning of May 6, where 11 scientists from the different departments and groups of the institute gave short talks. The scientific exchange between the departments and groups, together with the two awardees, during the workshop was extremely stimulating.

The MPI CEC congratulates André Bardow and Bert M. Weckhuysen and thanks them very much for the great enrichment for the anniversary celebration.