Successful collaboration between the University of Göttingen, HZB and MPI CEC 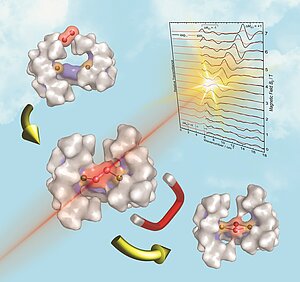 A team at the EPR4Energy joint lab of HZB and MPI CEC has developed a new THz EPR spectroscopy method to study the catalytic activation of molecular oxygen by copper complexes.

Molecular oxygen (O2) is a preferred oxidant in green chemistry. However, activation of O2 and control of its reactivity requires precise adjustment of the spin states in the reactive intermediates. In nature, this is achieved by metalloenzymes that bind O2 at iron or copper ions, and spin-flip processes are enabled through metal-mediated spin-orbit couplings allowing for mixing of states. In the case of type III dicopper metalloproteins involved in oxygen transport and oxygenation of phenolic substrates, little was known about the pathway leading to a dicopper peroxo key species with a stabilized singlet ground state after triplet oxygen binding.

Through a sophisticated ligand design, the research group led by Prof. Franc Meyer at the University of Göttingen has now succeeded in isolating a series of model complexes that mimic the initial stage of oxygen binding at dicopper sites and exhibit a triplet ground state. Researchers from the EPR4Energy joint lab of HZB and MPI CEC complemented this breakthrough in chemical synthesis with a new approach of THz-EPR spectroscopy. This method, developed in Alexander Schnegg's group at MPI CEC, was applied for the first time to study the function-determining antisymmetric exchange in coupled dicopper(II) complexes.

The new method allowed for detection of the entirety of spin state transitions in the system, which leads to propose antisymmetric exchange as an efficient mixing mechanism for the triplet-to-singlet intersystem crossing in biorelevant peroxodicopper(II) intermediates. Thomas Lohmiller, one of the first authors of the study, explains, "In addition to the knowledge gained about this important system, our method opens up the possibility of studying previously inaccessible spin-spin interactions in a variety of novel catalytic and magnetic materials."

The research is now availble as featured article in the open access journal JACS Au.