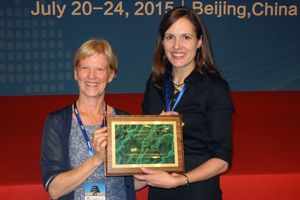 The Society of Biological Inorganic Chemistry (SBIC) was founded in 1995 and established to advance research and education in the field of biological inorganic chemistry. The learned society launched an Early Career Award that is presented to an early career scientist (no more than 15 years post-Ph.D. at the nomination deadline) who has already accomplished distinguished research in biological inorganic chemistry.

We are pleased to announce that the winner of the 2015 SBIC Early Career Award is Professor Serena DeBeer, research group leader at the MPI CEC in the department 'Molecular Theory and Spectroscopy'. Professor DeBeer received the award plaque at a special ceremony in Beijing, China at the 17th International Conference on Biological Inorganic Chemistry (ICBIC17) that took place on July 20th-24th, 2015.

Prof. DeBeer joined the conference also as a plenary speaker, as well as the MPI CEC Director Prof. Wolfgang Lubitz.